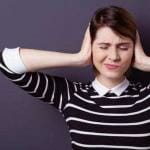 Do you feel enraged when you hear people chewing? Have you ever snapped at a family member or friend because you felt they were breathing too loudly? Does your blood boil when you hear someone sigh, sniff, or snore? You may suffer from misophonia, which literally translates to “hatred of sounds.” Some sounds – like nails on a chalkboard – make most people cringe or squirm with displeasure. But if an everyday sound (breathing, chewing, sniffing, tapping) triggers an intensely negative reaction for you, misophonia may be to blame. In some cases, the condition is severe enough to lower a person’s quality of life and prevent them from achieving life goals. If a specific sound incites your anger, causes you to avoid certain situations, or compromises your mental health, we encourage you to explore treatments for misophonia.

Misophonia is characterized by an emotional reaction and intense aversion to a common sound. Typically a misophonic person’s reaction to a trigger sound begins with irritation or disgust and then quickly intensifies in a way that feels uncontrollable. The sound may incite anger or provoke a fight-or-flight response, and it may significantly compromise a person’s ability to function and socialize. In a study conducted by a British research team, when compared to people without this disorder, misophonic people exhibited much greater physiological signs of stress (increased heart rate, perspiration) when presented with a trigger sound. In addition, brain scans revealed that the trigger sounds activated parts of the brain responsible for long-term memory, fear, and other emotions in misophonic people (source). We don’t know exactly what causes misophonia, but we do know these parts of the brain are responsible for the experience.

In addition, the researchers in the British study noted above noticed higher levels of myelin in the brains of misophonic people. A mixture of proteins and phospholipids, myelin forms an insulating sheath around nerve fibers, which increases the speed at which impulses are conducted. The high amounts of myelin could be a cause or an effect of misophonia. Other researchers believe that the condition relates to an increase in auditory pathways in the central nervous system or that it stems from a conditioned emotional response to trauma. Finally, misophonia may be connected to psychiatric conditions like anxiety, depression, and obsessive-compulsive disorder in some individuals.

Although misophonia has not been studied extensively, experts believe that it typically appears around age 12 and varies in severity. People who suffer from misophonia sometimes experience embarrassment, which may lead them to hide their condition from their doctor. For this reason, it is difficult to say how many people experience misophonia.

A known cure for misophonia does not currently exist, but several treatments for misophonia have proven effective in lessening the condition’s severity to improve the person’s quality of life. These therapies include the following:

Research suggests that more than 80 percent of misophonic people can achieve significant relief from the condition with treatment. With the assistance and expertise of a healthcare professional, along with some trial and error, you should be able to pinpoint the best treatment option for you. At Sound Relief Hearing Center, our treatment options for misophonia include sound therapy and TRT. To learn more, please schedule an appointment by calling 720-259-9962 or contacting us online.

COVID-19 (Coronavirus) Notice to Our Patients